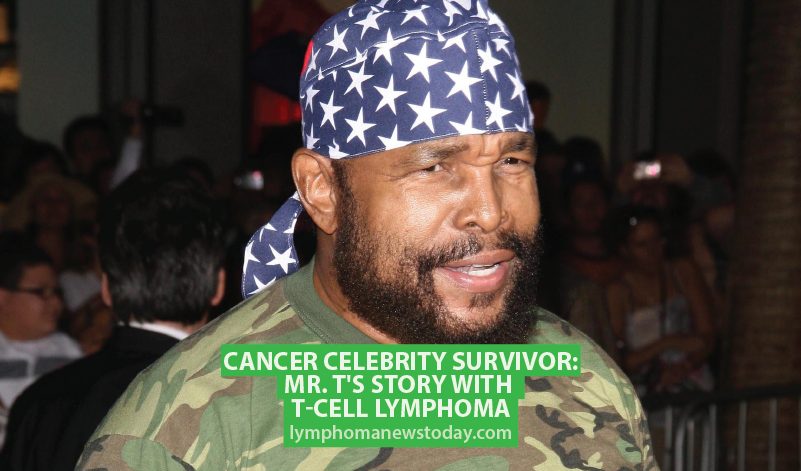 WWF wrestler, bodyguard, “The A-Team” TV star and movie actor, Mr. T seams to be a man who isn’t easily shaken. But a diagnosis of cancer is something to scare even the strongest of the men. Most people might recall Mr T, whose real name is Laurence Tureaud, for his career achievements, which include fighting Rocky Balboa in the 1982 movie “Rocky III,” but what some may not know is that the most important enemy he ever fought was lymphoma.

It was 1995 and Mr. T was taking off a diamond earring when he noticed a small sore on the ear, but at the time he thought it was too insignificant to call a doctor. Two weeks later, he went to a dermatologist, who recommended a biopsy. The examination revealed that Mr. T suffered from T-cell lymphoma. He was shocked by the diagnosis, and recalls anxiously waiting for the results of the additional tests which would determine the extent of the cancer.

“Can you imagine that?! Cancer with my name on it — personalized cancer,” said Mr. T in an interview with Coping With Cancer. “Now comes the worry. Here comes doubt, here comes anxiety, here comes fear, here comes that sick feeling down in the pit of my stomach. Can’t eat, can’t sleep. One day passes. No call from my doctor.”

When he finally heard the results of the tests, he was told that the lymphoma was localized on his ear.

Right after his diagnosis, Mr. T began radiation therapy — five sessions per week for four weeks. At the end of the treatments, his doctors told him the cancer was gone and there was nothing to worry about. But this isn’t the end of Mr. T’s story with lymphoma. Almost a year later, the cancer was back.

“Cancer sores sprouting up on my body and I can’t stop it! I have no control over this cancer growing outside of my body on my arms, my back, my legs, and my stomach …”

“It is cancer popping like microwave popcorn on my body. I am afraid at this point; no tough guy today,” he told Coping With Cancer. This time, the doctors recommended six weeks of high-dose chemotherapy, and Mr. T was experiencing both the struggle of dealing with lymphoma and the severe side effects of chemotherapy.

“I see why some cancer patients give up the struggle for life and quit,” he said. “With my body, my mind, and my spirit shell-shocked like that, quitting seems easy… Chemo and cancer fight from my head to my toes.”

Unfortunately, the chemotherapy was ineffective. He underwent interferon-therapy for a year and a half, low-dose chemotherapy, radiation therapy, and chemotherapy years later.

The lymphoma did not seam to be going anywhere. Sustained by his faith, Mr. T continued to fight and began looking at life differently.

“I have grown into a cancer fighter. I am a soldier, a veteran at that. Cancer wants to fight me again. I am not afraid this time. Fighting cancer for the third time, can I still believe in God? Yes, I can, and stronger than before,” he said.

“My fame couldn’t save me! My gold, my money couldn’t stop cancer from appearing on my body. If they can’t save me, then I don’t need them,” he said, explaining how he learned to live with the disease. “I pity the fool who just gives up. We all gonna die eventually from something or other, but don’t be a wimp. Put up a good fight.

“Don’t sit around waiting on death. We can be tough. We can be determined. Go out and have some fun and make death find you! We can be living with cancer, not dying from it. We can be cancer survivors.”

Years later, Mr. T’s lymphoma has finally gone into remission. He is cancer-free and a lymphoma survivor.

Earlier this year, Lymphoma News Today shared a video where Mr. T talks about his life after dealing with T-cell lymphoma in the 1990s. You can watch it here.